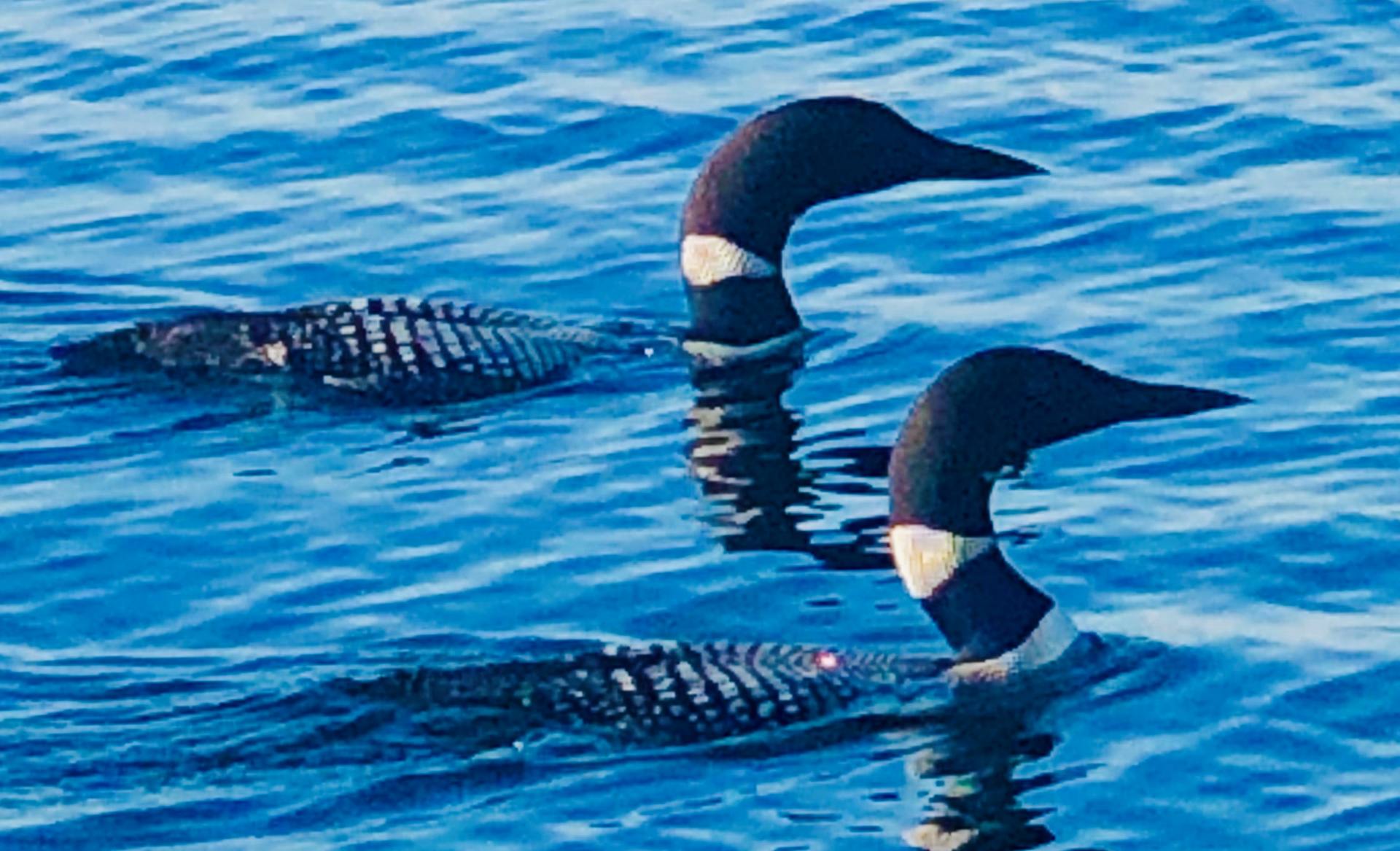 Washburn County has had a significant common loon population for the first part of this century on many of its lakes and rivers.  All of Wisconsin is home to about 4,350 loons.  The loon is a favorite bird for many, perhaps due to its distinctive melodic calls and streamlined black and white body with shimmery greenish black head.  Loons are excellent divers, capturing their daily diet of fish, preferably perch ten inches or less, and showing off their diving expertise going down as deep as 200 feet.  They are an admired symbol of the Northwoods.

Common loons, the only species of loon that lives in the lower forty-eight states, arrive on Wisconsin lakes as soon as the ice leaves in mid-to-late April.  While loons are creatures of habit often returning to the same lake, they don’t migrate as a pair and may have several partners during their lifespan of 25-30+ years.  A pair of loons will work together to build their nest consisting of mud, leaves, grasses, or they will use existing islands or quiet shoreline with natural vegetation.   Most loons in Wisconsin are nesting by mid-to-late May, with eggs beginning to hatch a month later.  Loons typically lay only one to two eggs at a time.  Adults begin flying south in late August and early September, heading to the Atlantic coast and northern Gulf of Mexico.  Amazingly, they can reach speeds of 70 miles an hour, and of course, their journey requires stops at lakes on the route.

Since 1985, the Wisconsin loon population has almost doubled, as estimated by  Loon Watch.  The increasing population is remarkable given extensive shoreline development, entanglements with fishing tackle and lines, increases in methylmercury levels, and other challenges such as predators eating loon eggs and swarms of black flies “attacking” loons, and chasing them off their nests.  However, a report by Audubon indicates that they are now in danger of vanishing from Wisconsin by 2050 due to climate change. Specifically, temperature and precipitation changes are expected to greatly impact loons. Already, loon rangers are reporting that higher lake levels have reduced the number of loon nests. It is not known how well loons may adapt, but generally, loons are expected to move further north.  Walter Piper’s Loon Project is tracking loon population changes in Oneida County.  The most recent statewide survey took place in 2020.

What can you do?

Respect the loons and their natural habitat.  Stay back from loons at least 200 feet and be careful not to create a boat wake when within 100 feet of shore, as this can destroy nests and erode shoreline.

Lakeshore owners can manage their shoreline with restoration and native plants and by avoiding pesticides and fertilizers.  Artificial platforms are a possible option only where natural nesting sites have failed.  Why?  Once installed, a platform requires an ongoing commitment for maintenance.  On some lakes, a permit from DNR is required.  Learn more.

Do your part to slow climate change.  Use reusable bags for shopping, conserve electricity, reduce use of plastics and disposable products, support alternative energy and more.

Use non-lead tackle and recycle monofilament line.  Spooner DNR Service Center accepts the line for recycling and there are receptacles at many boat landings.  Anglers who can’t recycle should cut the used line into 6” lengths before disposing of it.

Article written by Barb Luck and photo by Julie Scudiero.

Navigating During High Water Conditions
September 30, 2020
Board of Directors