What Happens Under the Ice in Winter? 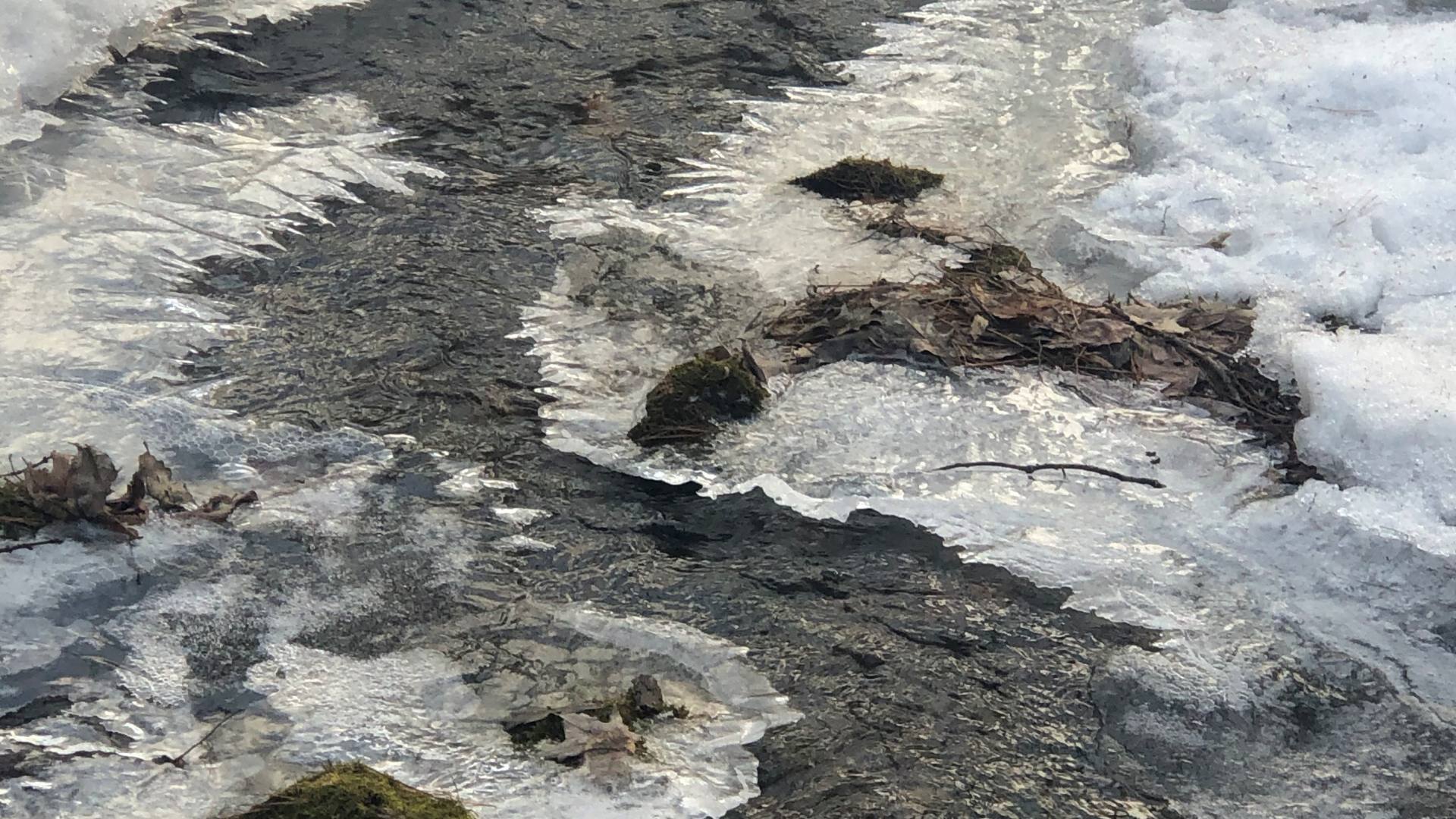 Our family likes to snowshoe along the stream in the Beaver Brook Wildlife Area.   A fresh snowfall provides a blank canvas for wildlife tracks to follow and see which animals moved through before us.  For me, the best part of the forested scene is to see Beaver Brook, flowing just like in the summer, but with some ice around the edges.   Reaching into the cold water to look under rocks for the stream insects, we see larvae that will emerge from the stream as winged adults next spring.  It always makes me wonder how stream life survives in cold weather and low water temperatures and what happens on lakes and rivers with complete ice cover at the water surface.

Natural water processes occur
There are two really amazing things about cold water.  First, the colder the water temperature, the more oxygen it can hold.  This is good news for creatures spending the winter under ice and snow-covered lakes and rivers.  Though ice and snow on the surface provide some insulation to the still-liquid water below, the ice cover stops the lake, stream or river from replenishing oxygen from the air at the surface.  Over the winter, oxygen levels can decline, and in extreme situations, near-complete oxygen depletion can result in fish kills.

Second, water is most dense just above freezing temperatures (4 degrees Centigrade or 39.2 degrees Fahrenheit).  As the water cools in the fall, the denser water sinks, pushing warmer water from the bottom up to the surface.  Ice forms (and floats) when the water at the surface finally reaches the freezing point.  This process causes the annual water “turn-over” in lakes, important for distribution of oxygen throughout the water column.  If the opposite were true and water was dense as solid, then lakes would freeze from the bottom up instead – and potentially freeze solid, which would obviously be devastating to stream life.

At the bottom in the sediment layer, low oxygen levels result in some decomposition. Leaf litter and organic matter on the stream or lake bed are broken down by bacteria and other decomposers.  Without oxygen, the process will generate methane and other gases, which form gas bubbles that can gather at the surface under the ice.  This “swamp gas” can escape to the air at the edge of the ice, with a noticeable odor.  People are often concerned that there may be active pollution upstream of areas like this, but in nearly all cases it’s a natural occurrence from decomposition on lake beds, in wetlands, or near beaver dams.

Creatures survive in different ways
Fish, stream insects, mussels (commonly called “clams”) and other aquatic invertebrates are cold-blooded, and their body temperatures adjust to the water temperature.  According to most sources, the metabolism of stream species can slow in winter to use as little energy as possible.  Cool-water fish species like trout enjoy the oxygen-rich cold water in streams; warm-water fish can swim to look for the conditions they prefer, usually near the stream or lake bottom.   Groundwater flow from springs brings relief to some fish, as this input of 40- to 50-degree Fahrenheit water is warmer than near-freezing lake and river temperatures.

Stream insect larvae (my favorite stream life!) appear the same summer or winter, hanging on in their preferred habitat.  Some species emerge quite early in spring; I recall watching the “march of the water boatmen” one winter, when several dozen insects crawled up a wild rice stalk.  The dark rice stalk had absorbed enough sun to melt a “collar” of open water around the stem, and the insects climbed right through into the sunlight!

Frogs and other amphibians hibernate, some by burrowing into the sediments.  Wood frogs can actually appear dead.  Sources differ on whether turtles actually hibernate, or just become mostly inactive, resting on the lake or river bottom but still alert to changes in temperature and light.  They can apparently gather oxygen needed for life processes directly through areas of their skin that are rich in blood vessels.

But who keeps right on swimming, climbs out onto the ice in the freezing air and doesn’t seem to notice the cold at all? Otters! They seem active and vibrant in every season and any weather.  And that makes the best day of all snowshoeing – seeing an otter or at least finding one of their tube-shaped trails where they alternately ran and slid through the snow.

Plants are survivors too
What happens to aquatic plants when the water is cold, and the ice and snow cover blocks sunlight needed for photosynthesis?  Most of our aquatic plants die back in the fall, relying on their root systems to store energy for new growth in spring.  Many algae settle to the warmer bottom sediments to wait for the next growing season, but some do manage to use the light that penetrates the ice cover.

Love the water
We usually think about protecting lakes and streams more in the summer, when we are out enjoying time on the water.  One big way to help protect water quality in the winter is continued good housekeeping on city streets, country roads, yards, and even on the ice!  Litter and pet waste in the snow can end up in a stream or lake via snowplowing and spring runoff.  Be sure to pick up plastic bottles, litter, and bait containers, and to dispose of pet waste properly in every season.  Better yet – stock up on reusable gear and don’t buy throwaways in the first place.

Enjoy your time in the woods and on the water for the rest of the winter – there aren’t any ticks right now!

References include “A Look Under the Ice: Winter Lake Ecology” written by Brendan Wiltse and posted at www.ausableriver.org, and “Streams in Winter” by  Edward T. Rankin, posted at https://midwestbiodiversityinst.org.

Beloved Loons Need Our Help
January 9, 2020
Board of Directors